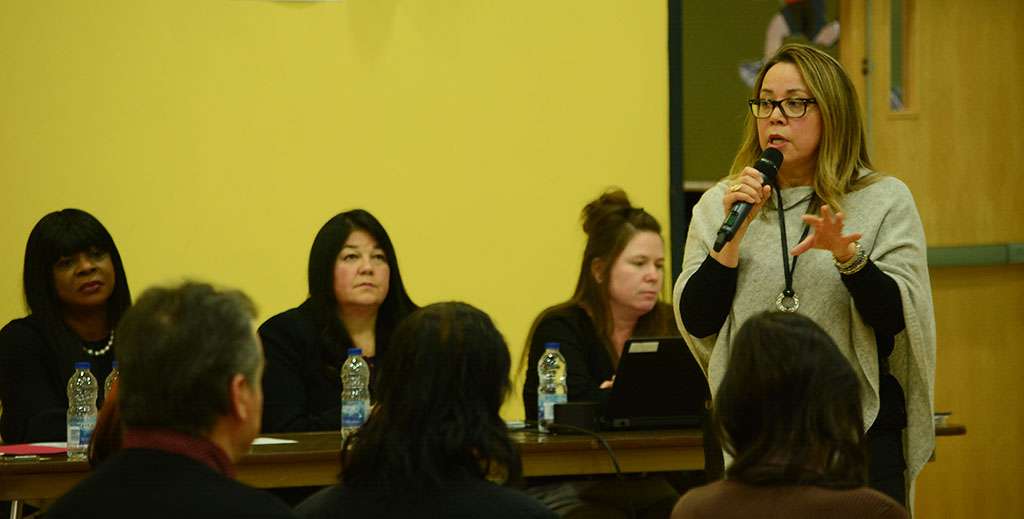 Education centre Robin Delaronde had the mic at the front of the room for most of the meeting last week as community members peppered her about KEC policy and assistant director Earlyn Sharpe’s (left) status in the community. (Daniel J. Rowe, The Eastern Door)

After an hour of questions and explanations about the finances, Kahnawake Education Center associate director of education Earlyn Sharpe came under particular fire with around two hours of questions directed mostly at the former Karonhianónhnha principal for her hiring, roles within education, and attitude towards teachers.

“Yes or no, are you able to move her out of the principal of Kahnawake Survival School?” asked former KCSC board member Treena Delisle, objecting to the temporary position Sharpe has occupied since principal Jackie Leclaire went on a leave of absence.

Much was made of Sharpe’s hiring as assistant director, but also of her filling in as pedagogy officer at Survival and principal, positions she is not paid for. Community members questioned her ability to do all three jobs.

“How can she do 100 percent for all the three jobs she has?” one member asked. “I have my daughter here with me, she goes to KSS, and she has had a few issues. Every time she goes to see the principal and talk about something, every time she seems to be pushed and pushed and pushed. How is she able to do 100 percent on all three jobs when my child is suffering from her having to be here and there and there?”

Director of education Robin Delaronde responded to the question.

“I have never seen an individual work as hard as Earlyn has worked in education,” she said, as members began yelling at her.

Karonhiio Curotte responded in support of Sharpe, as his son attends KSS.

Community members suggested, as they have in the past, that Donna Goodleaf, who has a doctorate in education, should have been hired in lieu of Sharpe.

“For all of you parents in here, if you really think that when your child graduates and gets their doctorates that they’re going to come home and work for this community, no they’re not,” said a community member at the meeting. “They will be overlooked as she was and continues to be.”

After around an hour of criticism and support of Sharpe, she rose to speak.

“I am very well qualified. I worked very hard for your kids. I have been accused of a lot of things that are not true, and this is why I did not stay away tonight. I have nothing, nothing to be ashamed of. I am proud of who I am.”

“I can attest that all interview process are all done fairly,” she said. “With all the high level positions, it’s really hard to get people to apply. A lot of people are qualified, but don’t want the responsibilities… We want people from the community to take these jobs, but they’re not applying.”

Almost immediately people in the audience shouted about those that did apply, and laughed.

Delaronde added that the KEC has struggled to find suitable applicants who applied for the administrative posts.

“It is a challenge to find good people,” she said, as a community member yelled, ‘I applied.’

Sharpe defended her hard work, as Delaronde did earlier in the night, and said she respected whomever she worked with, but did not stand for disrespect towards her.

“I’m the only black woman in this room, and I understand that’s who I am. I am not fearful,” she said. “If I leave this community, and I know one day I will, I will walk with my head held high and I will know that I did an excellent job for your kids. I love your kids. They’re amazing. I love the kids of Survival School and that’s why I’m here.

“When I take someone disrespecting me, lying about me because I’m not from here, I don’t think that’s fair. I would not treat you like that if you came to my community I can assure you. If I have to walk out of here tonight and don’t come back, I’m fine with that,” said Sharpe.

The response was typical of the night with one half clapping in support, while the other laughed or called out responses.

Many stood to criticize Sharpe, with one member suggesting there were many complaints lodged against Sharpe when she was principal at Karonhianónhnha.

“With that many complaints how could she even be considered a candidate?” one community member said.

Delaronde responded saying that along with complaints came many compliments about Sharpe.

At around 9 p.m., a community member took the mic and asked if elections for the KCSC seats could take place, as parents began leaving the gym after three-and-a-half hours of open discussion.

Leaving the board was vocal chairperson Deidre Diome, who was at the front of the room responding to questions throughout the night. Vice chair Melissa McGregor, Cheryl Zacharie and Kara Paul did not run for another term and KSS representative Shelley Rice ended her term.

Before the election, Survival School teacher Danny Stacey spoke about the state of affairs at the school, and responded to the criticism that teachers at the school were afraid of change.

“My family is hurting,” he said referring to the school staff. “My family is not well. I don’t have the answers, but I hear them crying, literally tears. Why? It’s because of the way they’re being treated.

“I’m not going to be able to tell you all of those answers because I want to go to work tomorrow, but some of them are here tonight and they’re hurting… This is not sustainable. We cannot go on like this. We’re not allowed to talk. This is a Mohawk community. Why is our voice being taken away?” he asked.

“I hear that the KSS teachers are afraid of change. We’re not afraid. I’ve been there since 1980. I went through all those decades of change. Teaching is change every damn day.”

Concordia University student Jennifer Paul felt there could be more productive ways to hold a meeting of this kind.

“It was extremely tense, but I believe that the entire community have a lot of built up feelings,” said Paul. “There are numerous ways that this meeting could have been held differently… Another issue is just concerning respect in general. It got heated on both sides talking about the Combined Schools Committee and the parents here. Overall, it could have been structured a little differently.”

Several items on the agenda (legislation update, KEC education report and KCSC report) did not get brought up.

Sharpe spoke to The Eastern Door after the meeting, citing her track record and personality.

“I’m very open, but I’m not the type of person that will go out and make friends,” she said. “I’m a lot about my work. It is what it is. I love the challenge. If it challenges me, I’m all in. If I care about it, I’m all in.

“Me caring is making sure you have the best training you can get so you can be the best you can be in the classroom. I try to treat everyone fairly. I don’t clique. People think I’m standoffish, yes, but I don’t like cliques.” 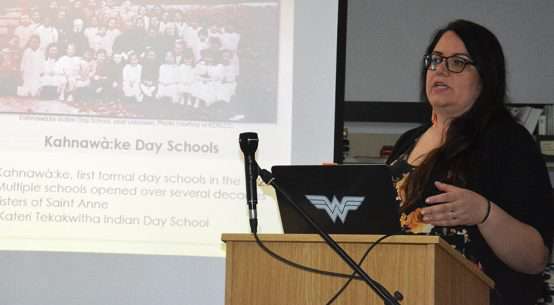 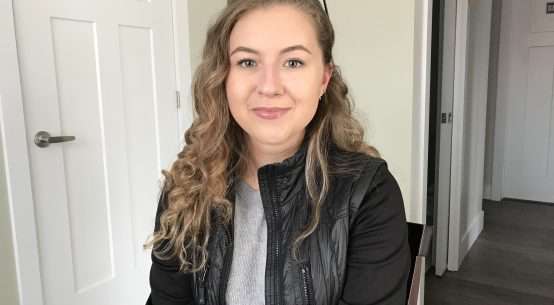 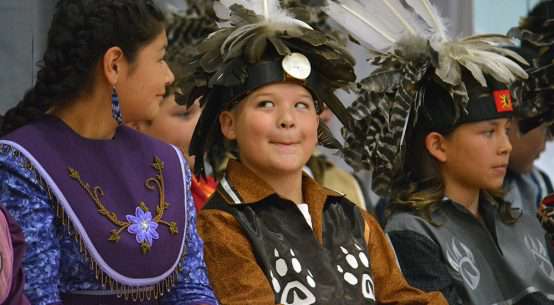 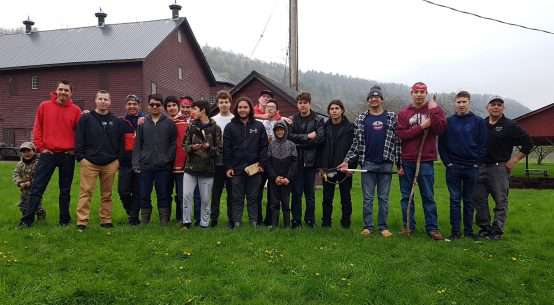