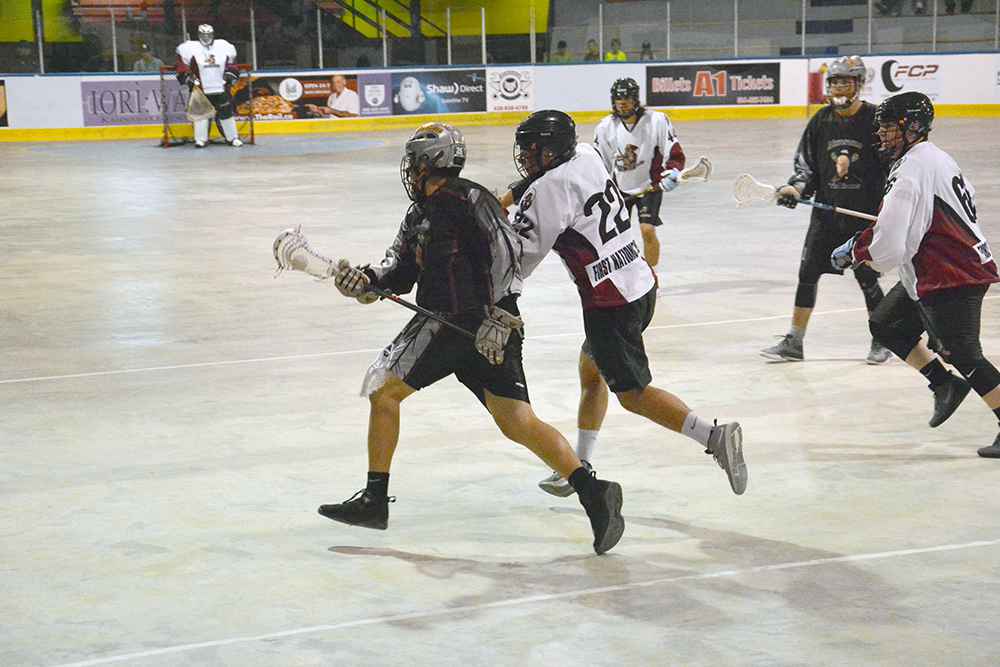 The Kahnawake Hunters avoided dropping a third straight in the always-intense rivalry game against Akwesasne Sunday and pulled out a gutsy come-from-behind win. It was the second of three wins for Kahnawake. (Daniel . Rowe, The Eastern Door)

Look. Relook. Rub eyes, and look again, and you will have confirmed that the Kahnawake Junior B Hunters are at the top of the Far East division of the OJBLL (Ontario Junior B Lacrosse League). Kahnawake is 6-3, and took three straight over the week including one over Akwesasne, the Hunters’ biggest rival.

After stumbling out of the gates at home Sunday to the Indians the Hunters made sure to not let another game slip through their collective gloves to Akwesasne, a team that beat Kahnawake twice in two, thus far in the season.

Late in the third, Kahnawake sniper Cam Horn snapped home the game winner on the power play to take the game over the Indians 9-8.

“(It) came off a cool little play my grandfather taught me,” said Horn. “It had the D confused and good execution by the power play.”

Horn had two of his three goals in the third period, and was aided by one a piece from Turner Allison and Stone Jacobs, as the Hunters won the third 4-3 to take the game.

If Kahnawake was to prove itself a real deal this season, the team needed to grab a W over the Indians. Though less than great early, and entering the second period down 4-1, the Hunters ‘snipers rallied and tied the game by the end of two before taking the bull by the horns in the third.

“We can finally get over the hype and treat it like any other game,” said Horn.

Akwesasne defenceman Chad George stood by the rink exit door giving pounds to each one of his teammates, knowing the game could very well have went the other way.

“It was just a lot of messing up on D and not a lot of talking,” he said. “We got to shoot the ball a lot more, set a lot of picks for our shooters and get in there.”

“We didn’t have discipline,” said Francis. “Our guys were taking unnecessary penalties and we didn’t capitalize on our power plays. I think we just got to go back to the drawing board and come back with some more discipline. I’m frustrated with the boys right now. We played hard, but we didn’t play smart.”

Kahnawake v. Akwesasne contests are always must-see events for lax fans, and everyone on the floor knows the intensity level is ramped up to 11.

The team with cooler heads will generally prevail.

“It’s a rivalry,” said Francis. “We’re used to this. When we play each other it’s always hard, and it comes to power plays and men down, and we were taking dumb penalties and that’s what killed us.”

George is convinced his team will be ready when Kahnawake comes to the A’nowara`ko:wa Turtle Dome Arena June 15, and thinks the Indians will be a team ready to go far when the playoffs come.

“It’s pretty frustrating knowing that we’re the better team and that penalties sort of screwed us over in the end,” said George. “This squad will bring us all the way no doubt, but it’s just the little things we’ve got to work on.”

Sunday’s win came the afternoon after a 10-8 win over the Gloucester Griffins, where again Kahnawake came from behind. Gloucester won the first period 6-3 before “Baby” Jake Rice turned up the heat, scored a hat trick in the second, and led the Hunters in outscoring the Griffins 5-2 in the period. In period three, it was Kahnawake’s defence on display as Gloucester failed to score and Horn and Allison added two to secure the win.

Kahnawake was not done. At home, the Hunters’ offence let loose a flurry of pain on the Nepean Knights Tuesday, and stamped their seal on the top of the division, winning 16-6. Rice had four goals and an assist, Jacobs three and four assists, Alan Singleton three and three, and Horn was virtually unstoppable scoring four with four helpers.

The Hunters’ squad travels for three games starting today where the boys face the Newmarket Saints, followed by a game at the West Durham Ironheads Sunday, and a game in Nepean Tuesday. The next home game is June 3 against the Green Gaels. 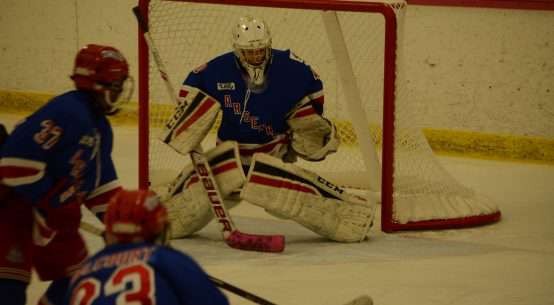 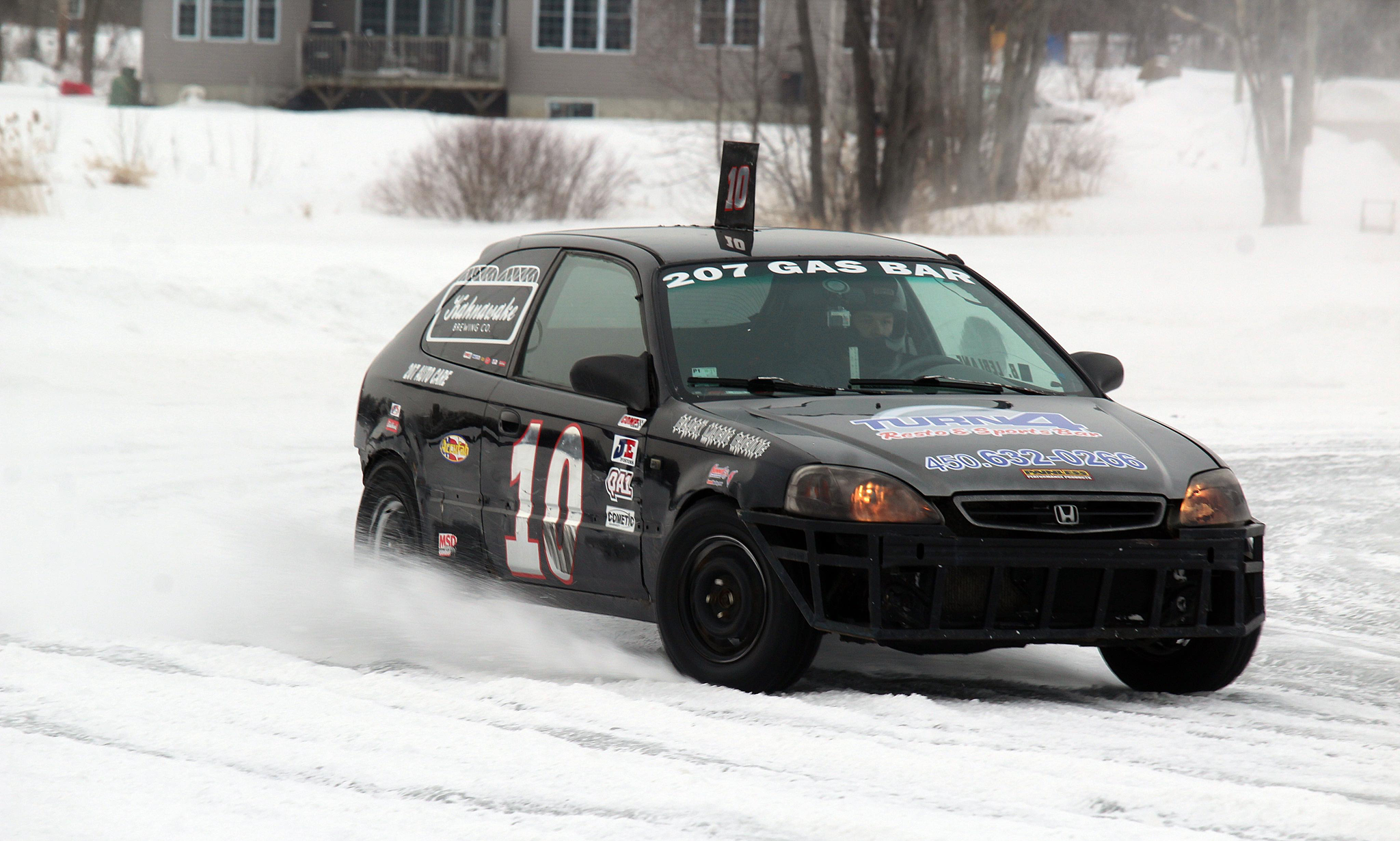 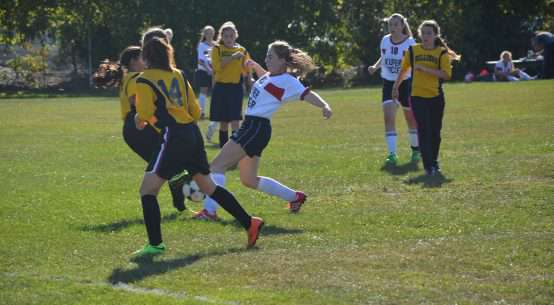 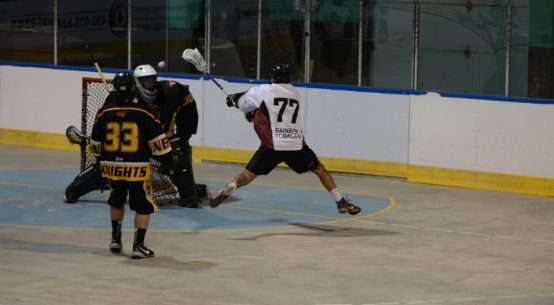