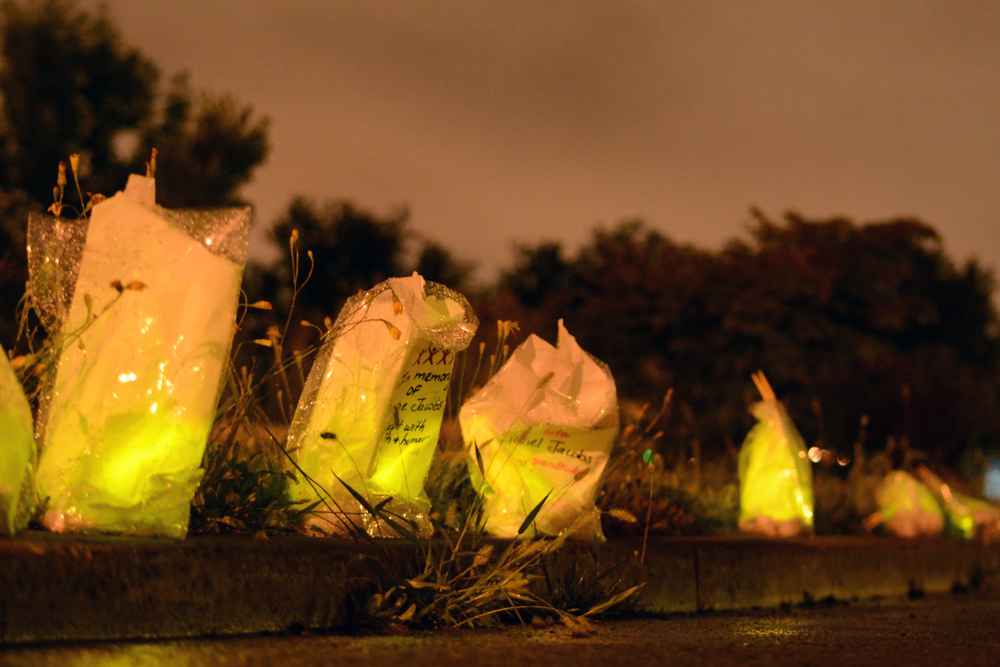 Bags of light with the names of warriors past and present tasked with fighting cancer lined the Karonhianónhnha School’s front line Saturday, as community members fought the weather to help a new initiative to support local families. (Daniel J. Rowe, The Eastern Door)

Cancer is a reality in all communities big and small, and Kahnawake is no exception.

Those who walked the front parking lot and field of Karonhianónhnha School on a rainy Saturday night could read the names of those affected by the debilitating disease, that has taken the lives of many friends and family members of those in the community.

Wayne Rice, Brenda Gabriel, Jimmy Goodleaf, and many more names were written on paper bags illuminated by glow sticks that lined the walkway, as walkers contemplated those who have passed on and those who remain behind.

One survivor at the walk was Margaret Dearhouse, who won her battle with lung cancer and organized a team to take part in the walk.

Margaret’s granddaughter Keanna Goodleaf was alongside her mother, father, sister, grandmother and others sporting cropped short hair that she cut to donate to the cancer society, to be used by those who have no choice but to lose their hair.

Seeing her daughter’s sacrifice for the cause was emotional for Keanna’s grandmother.

“When she walked in, I was totally blown away,” said Margaret. “But then I’m looking at her, and she suits it. She’s beautiful to begin with, inside and out.”

“I’ve had it planned for quite a while, since elementary school,” said the 17-year-old. “I was waiting until after prom. I just got really inspired because I felt bad because some people have to go through terrible obstacles in life and have no hair, and I had long hair, so I decided to cut it off and give it to someone who was less fortunate and lost their hair in a hard battle. Mine grows back anyway. It’s just hair.”

Seeing so many lights and people at Karonhianónhnha was a huge boost of confidence for the survivor.

“It’s amazing,” said Margaret. “For this to be happening now in Kahnawake is great. This is the first time it’s happening with the purple ribbon. It was a nice turn out, and look at all these lumineers. It represents all the cancer in Kahnawake.”

With the positive, naturally comes the sombre reality of seeing how many people have been handed the raw deal that is a cancer diagnosis.

“It’s sad because you see all these names and most of them have gone on,” said Madelyn Cross.

Cross’s twin brother Mathew Cross lost his battle to cancer as did her aunt Florence Cross and friend Bertie Jacobs. Cross’s sister Gloria is a survivor who has beaten cancer.

The over $15,000 raised will go to the Tetewatatia’takéhnhahs cancer support group that will provide assistance to local individuals and families going through treatment.

Group member Anna Mae Rice said the group is in discussion of the criteria for accessing funds, but if anyone is in need of assistance they can send a request to Box 1256 at the post office, or be dropped off at Peace Pipe Convenience.

“We also hope to establish a relationship with the Cancer Support Group (at Kateri Hospital) in the future,” said Anna Mae Rice, whose husband Wayne Rice died of cancer last year.

The battle with cancer is long, hard, and often incredibly unfair. Margaret Dearhouse has won the battle, but still goes for checkups every three months, and does regular x-rays, breathing tests and scans to ensure she’s still in the clear.

She knows both the dread of diagnosis and the joy of remission.

“It’s great because when you’re told, you think it’s a death sentence right away,” said Margaret. 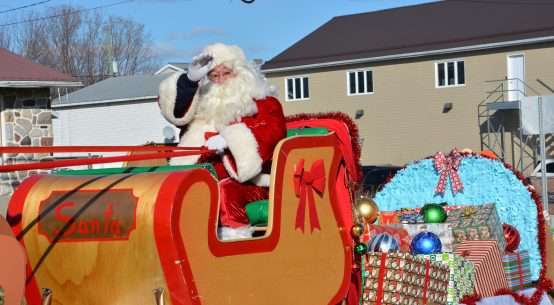 Stand by the street today for Santa and co. 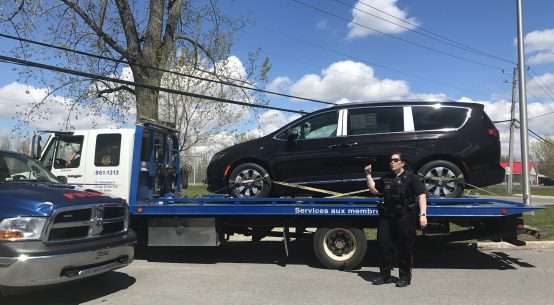 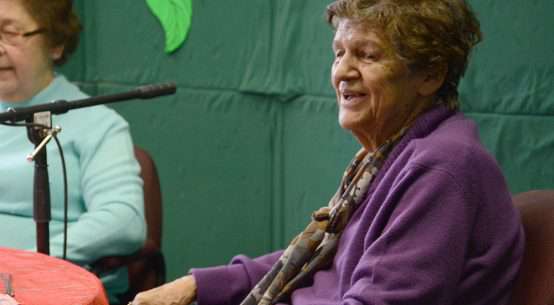 Saying goodbye to a fluent speaker